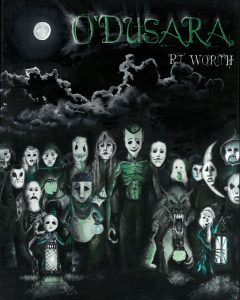 The city of Efika is sabotaging TransAn Company; destroying arms imports and crippling the mega-conglomerate financially, leaving it now after several strikes staring into the abyss. At the head of the city’s secret organisation is Templar Isthmo, a passionate and sometimes head-strong young man who lost his parents during the infamous Scarlet Magray march. The active rebels in the city look to him as a pillar of strength. His responsibilities don’t stop there, however. With his other hand, he defends the city from the growing threat of Dusani at their borders, leading the Valley Guard Volunteers into the night to repel the ominous wild folk who inch ever closer to the city boundaries. The monsters have no mercy for any poor soul caught in the wild after dark. But Templar knows no mercy either; any monster caught in his headlights will be executed without a second thought. Little does he know of the war coming…the war he unwittingly starts.